You know how it often takes a lot of courage to do something unconventional in life? Well, it probably maybe something I’m growing to feel adamant about, much less ponder upon these days. This includes the very night I decided to do the big “chop” 4 years ago (nope..absolutely no regrets!)

So my visitor and I decided to take a supposedly short stroll within the neighborhood one evening. However, for lack of defining our destination, we found ourselves walking along the very busy streets of Osu-Oxford. This stroll was probably needful, since we both noticed our gradually bulging stomachs and arms which were definitely a no match for our youthful ages. Hence, we deemed it necessary to undergo some calorific crucifixion that night.

After traversing close to about 5 kilometers, we decided to allow our buds taste the sweet and nourishing liquid of kube…..at night. This however meant we were obviously missing out on one thing: no sunshine to help deepen our refreshing moment of the anadwo kube! Nonetheless, the missing weather element did not alter the sweet taste of the kube liquid which we joyfully lapped at; carefully savouring all the sugary juice of this fruit. ..yum! 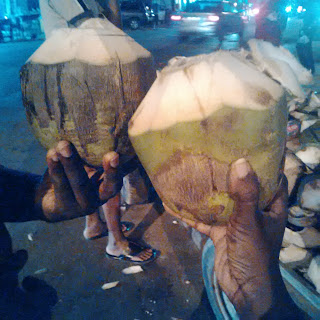 Of course, we ended up paying a higher price of 2.00 cedis per nut on demand from the coconut seller, even after our several negotiations! An amount I am still pondering and trying to reason out, as to whether it was because we bought the kube at night, or because the kube stand was directly opposite the Oxford mall or we simply just annoyed the kube seller with our excitement at the nut’s juice…these days you never know what could be the genuine reason for inflated prices..

Satisfied, though dismayed at our rude rip-off, we still made our journey back to the neighbourhood chatting and jittering over every silly issue that popped into those little round heads of ours. Some topics of course were triggered by the sights and scenes along the way home. Whilst at it, we each would occasionally and clandestinely stick out the tip of our greedy tongues to wipe away the remaining few drops of kube liquid lodged the sides of our lips..(Of course out of the sight of one another).

Finally, we completed our return journey back to House No. 220, and were greeted with a loud and harmonious chorale of croaking sounds of frogs, mixed with the shrieking stridulating sounds of the male crickets who were earnestly seeking their female counterparts in the dark thickets. Aaah..such wonderful music, that we wondered who the conductor of this musical piece could be. Indeed,  this ‘invisible’ choir conductor was doing a great job at directing each (in) vertebrate to sing their various parts in such unison!

A glance at our watches, showed the long arm strike a quarter to 10. The moonlight’s beams were getting stronger, with the twinkling of the stars glowing brighter as though to give a wink any time we glance up the sky in effort to stifle the yawns. Obviously no one of us wanted to be the first to admit tiredness for fear of being ridiculed as a weakling who couldn’t endure a 10 kilometer journey.

It was then that we realized how worthwhile Anadwo Kube on the Oxford Street was!

By Vanessa Modupe Jobarteh
By kodako at July 28, 2015 No comments:

It was the look of resilience!

It so happened that early this morning, I found myself walking along the narrow streets of Swedru town market, and I had the chance to interact with some business women I met there. The streets were crowded with several stores, each displaying their wares. Every store here, waiting for the day to bring upon them a smile of blessings and good luck.
The town gradually wakes up to a bustling atmosphere, but there's one thing that strikes me;... the look of resilience on the faces of the women here. The look that says a firm No in the face of adversity and the troublesome economy. The look, that implies they intend to fight on in spite of the little or no sales they made in the previous days.
Amazingly, I see something similar on the faces of the female farmers I meet on my way to the hinterlands of the Central region. It is the look of resilience.
This look is unmistakably noticed grâce à the wrinkles that appeared on their faces as they managed to break into a smile when I waved at them. The sweat beads I noticed, moved quickly down their darkened skins, as each muscle and ligament within their bodies worked hard in unison to support the burdensome loads of wood and farm produce they carried on their heads. Not to talk of how they bravely trod the red muddy road back to their homes....unfortunately, without shoes or slippers on their feet.
Yet one thing remained unchanged on the faces of these women; It was the look of resilience!

By: Vanessa Modupe Jobarteh
By kodako at July 26, 2015 No comments: